As I’m sure most of you are aware, I kinda like animals. Shocking, right? Someone call the paper, we have a breaking story: Wendy is a Fan of Animals. I know, I know, old news. But recently, on my weekly trip to the library, I came across a book I hadn’t seen in years.  And this unexpected trip down memory lane prompted the realization that this deep, undying appreciation for animals has been a part of me, woven into my DNA one might say, ever since childhood. You see, this love didn’t come when I was a teenager and had to dissect a pig in Biology class nor did it develop after some terribly traumatic experience forced me to re-think my stance on animal protection. It has, apparently, just always been there.

How do I know? One word: Lad. When I was a kid I loved this one book about a dog named Lad — written by Albert Payson Terhune way back in the day (1929). Lad of Sunnybank. Maybe you’ve heard of it. There were several books in Terhune’s series about the dogs of Sunnybank, but this one was my favorite.  All of them were about pretty much the same thing: Lad the Collie goes on adventures, protects the estate, and spreads his canine loyalty and kindness to others in typical Collie fashion. Very heartwarming stuff and based on a real dog (even better, right!?). 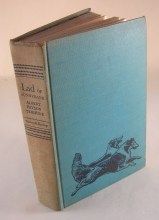 In one of the stories, Lad finds a baby raccoon alone and hurt in the woods and takes it home to the Mistress (because she was the go-to person in times of need). The raccoon (whom the Mistress names Ramses) is tended to and rehabilitates under the care of the Mistress and Lad (aww!). Lad protects the raccoon whenever trouble rears its ugly head. Hey, it’s a kid’s story, what do you want? Pretty basic stuff here but I loved it.

Just like any story, Sunnybank had a villain. It was the next door neighbor who thought Ramses was a pest and decided that he must be done away with by any means necessary (insert evil mmmwhahahaha laugh here). Now, when I say next door neighbor, I don’t mean in an urban sprawl kind of way where your neighbor is like right there in your backyard…no, we’re talking rural, miles wide estate kind of way.  But still.  His neighbor having a pet raccoon apparently just annoyed this guy to no end. So what does he do? He puts crushed shards of glass in some chopped meat and sets it out in the woods for Ramses to find.

A little Raccoon 101 for some of you (something the evil neighbor apparently wasn’t privy to): raccoons are quite fastidious and often clean (or “douse”) their food before eating it, vigorously rubbing it between their paws or washing it in water to get off dirt and whatnot. That’s exactly what Ramses did…and it ended up cutting his hands to ribbons. 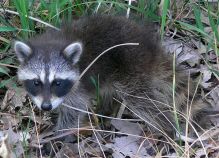 A raccoon we will call Ramses

The whole idea just gave me a sickening ache in my stomach. Not the gore or blood so much as the cruelty. The idea that someone could hurt another living thing so badly pulled at a part of my heart unlike anything else. Add to that the confusion on the part of the animal. Ramses had no idea why all of a sudden he was bleeding, in pain, punished. There was only confusion…massive confusion… as he stared at his hands and tried to understand the reason behind pain. I think of this when I come across any story of abused animals. They have no clue why these terrible things are happening. They’re just trying to live, to eat, to be.

Even as an adult the story of Ramses disturbs me.  Maybe because I know too many real-life stories that are just as bad and worse. Seeing this book and remembering Ramses served to remind me that long before getting into the line of work I’m in now, back when I was that little girl reading Sunnybank for the first time, the thought of abused animals held a special place within me and my love for animals has only grown as the years go on.

The real-life Lad — to find out more about the dogs of Sunnybank, click the photo

14 thoughts on “Lad of Sunnybank”