So my cat is “neurologically off.” Note that I didn’t use the word “crazy.” Crazy could mean anything. It could mean that she does silly, unpredictable stuff at the most random times to which every other cat owner in the world would raise their hand and say, “So?” All cats are “crazy” in the cutesy, abstract sense. I get that. I want to be very clear that my cat has gone beyond that barrier into the land of true mental disorder.

Neurologically off is the term I use simply because that’s the phrase my vet used when he was kindly trying to soften the blow that comes when you have to tell someone their beloved pet is “special.”  To be honest, he didn’t need to be so gentle. We already knew that something was a little off. Taking her to the vet was just to get that 100% certainty that she’s not all there.  It pains me to admit that my cat might not be the sharpest claw in the paw. But facts are facts: the lights are on but nobody’s home. 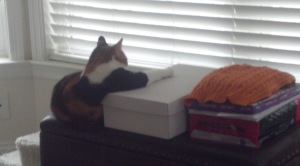 staring at the closed blinds

She thinks her name is pshpshpshpshpsh (that silly noise us cat owners make when we try to coax the cat to come our way and which I obviously can’t spell). Seriously. No matter what nook or cranny of the house she might be exploring at any given time, if you even whisper that noise she’s there, at your side. I would say she “magically appears,” but that’s not true. She’s kind of a big cat, and clumsy/awkward, so the house always shakes a little when she jumps down from whatever lofty spot she has found herself in and hearing her come down the stairs sounds a bit like a herd of elephants. The cool thing is she doesn’t think it over. She doesn’t assess the pros and cons of her decision or think about what’s in it for her before responding…like our other cats do. She hears that prompt…I’m sorry, her name…and it’s like she’s drawn in from a laser beam.

Also, her depth perception isn’t exactly crisp. Sometimes she’ll saunter up to rub on my leg and miss by a good two feet. Same if she comes in close for a loving “head-butt.” If you don’t meet her more than halfway she’ll totally whiff on it.

Part of her problem, or rather, part of her personality stems from when she was a baby and we first rescued her. She was sick with an upper respiratory illness. Contagious to our other cats but not to us or our dog Rufus. Because of this, she spent several weeks contained in rooms with just my daughter and me and Rufus. She and Rufus became fast friends. Coupled with the fact that Kitten (yes, that’s the best we could come up with for a name) was likely separated from her mother too soon she adapted to Rufus and now shows definite signs of canine behavior.  It’s a hoot.

What she lacks in mental acumen she more than makes up for in heart. She’s quite possibly the sweetest cat in the world. She gives love to everyone and wants nothing but love (and attention) in return. She doesn’t fall into any of the nasty stereotypes cats are often prone to (the bitchiness, the scratching, the pooping on your bedroom pillow, etc).

Maybe she getting a bad rap by being called neurologically off.  I’m not sure what the vet’s agenda was in telling me this, except maybe to explain some of the behaviors we had already seen. But his diagnosis doesn’t make a bit of difference. She’s a part of the family, she’s loved, and she’s perfect just the way she is.

22 thoughts on “One Crazy Cat”