The holiday season is coming to an end and as always it’s a little sad that the year has flown by. We’ve eaten too much, spent too much and binged on too much spiked cider…okay, well, one can never have too much cider…the point is — now we’re at the finish line about to watch the big metal ball drop. As the clock inches ever closer to zero on 2015 my mind starts racing with thoughts of what’s to come and, more importantly, how I want the future to look.

Come New Year’s I have a pretty steady habit of falling into the inevitable pit of denial that is typically referred to as the “New Year Resolution.” Ahhh, so many grand plans, lofty goals, and stellar aspirations! You may be familiar with what I’m talking about. The affirmation that this will be the year that you stick to that fantastically slimming new diet or never waver from an unimaginably boring exercise schedule or god forbid just being more patient with all the other people in the world (yes, even the really annoying ones).

I make these plans as if the cycle won’t repeat itself and these resolutions won’t go down in flames by the second week of January. But, as history shows, while I’m awesome at coming up with these wonderful ideas, I am severely lacking in the follow through. And that’s kinda the part that counts. I’m reminded of Seinfeld… “You know how to take a reservation…you just don’t know how to hold a reservation.” The same could be said for resolutions.

So, why do we even make these hollow promises to ourselves? Why do this to ourselves year after year? More often than not, as we’re scraping the bottom of a pint of Ben and Jerry’s or letting loose a steady string of obscenities at the car ahead of us who wasn’t moving fast enough to let us speed through the yellow light, we end up feeling horrible. Okay, well maybe I don’t feel too horrible about the Ben and Jerry’s — have you even tried Karamel Sutra!? Oh my god it is sooo good! Who can resist? Certainly not me.

But the point is – with resolutions; we’re once again reminded that we simply can’t always stick to all of the things we feel we have to improve upon. And maybe that’s not the point. Perhaps just acknowledging that we’re not perfect is enough of a positive step.

Or perhaps that’s just a BS excuse that’ll make it that much easier for me to watch my new running shoes collect dust in the back of the closet. 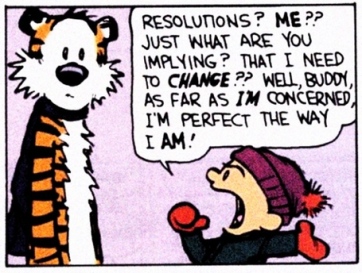