So. Just came into the room to see the ne’er-do-well trying to murder my dog. She had her tiny little vampire jaws clenched tight around poor Petra’s neck as the hapless dog lay there wishing she was anywhere else but not exactly sure how to go about making that wish a reality.

To back up a bit, when I last left them, they were both napping, sweet and sound, on the bed. I have no idea what could have possibly occurred to provoke such a scenario, but I have no doubt, no doubt, mind you, that the ne’er-do-well just woke up in the mood to throttle someone and chose the nearest victim who wouldn’t fight back. That’s Petra in a nutshell. She will just lay there, as proven by this evening’s encounter, and simply take the abuse heaped upon her by even the smallest of bloodthirsty, homicidal fur-covered packets of cute. It was actually quite surreal. There was no struggle from Petra, no shaking or violent actions on the part of the would-be murderess. Instead Petra turned to me with this look of “Do you see?  Do you see now the shit I have to put up with around here!?” while the ne’er-do-well Holly was highly offended at being interrupted.

I didn’t get a picture or I would share with you all the crime scene as it happened. Instead, I chose to step in and relieve Petra of the very determined set of teeth clamped round her petite throat.  No worries by the way…Petra is perfectly fine and the ne’er-do-well was promptly and appropriately chastised for such cold-blooded, unnecessary behavior towards another beloved family member.

But now I’m asking myself, should I be concerned? Is it just by luck or circumstance that I wasn’t the nearest possible victim for the evil that resides in my own home?  Was this a practice run or was the innocent, shy Petra the intended target all along? Holly certainly showed no remorse so she’s apparently becoming more brazen. No longer is she confining herself to simply taking my spot, giving sullen looks, pushing the dog off the bed, or touching my things. Oh no. She has stepped up in the world.

I think maybe I’ll go make a pot of coffee. It might be best not to sleep for a while. And tuna. I definitely should get a can of tuna at the store tomorrow morning, first thing. Bumblebee. It’s her favorite. Maybe two cans. 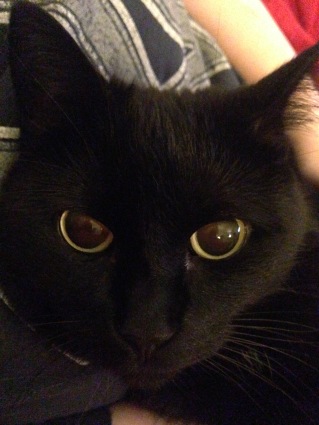 the ne’er-do-well in the arms of her savior