I saw the below picture prior to reading the so-called article (which is fake, by the way) and couldn’t help but immediately ask: whose eyeballs!?  Are they human? Are they snake eyeballs…or maybe chicken, or what? Then I thought, nooo, they have to be glass eyeballs – like maybe the guy worked at a marble factory or something and the writer meant those nifty cat-eye shooters or perhaps he works for a medical office and couldn’t resist the pretty little glass eyes that would look oh-so-perfect in his creepy little home-made dolls that somehow look just like his old school chums – because no one in their right mind would do something as crazy as stuff real flesh and blood eyeballs into his anal cavity, right? Right!? Come on, work with me here people.

As it happens, they were bovine eyeballs. But that’s really inconsequential in my mind. It’s the act that fascinates me most of all.  I mean, who wakes up and thinks: “When I go to work today, I’m going to steal eyeballs, and I’m not just going to walk out of there with those lovely orbs in a bag or jar, or even my lunch pail, oh no…that’s for amateurs. Pfft. I’m going to stuff those babies right up my you-know-what because I’m nothing if not fully committed to this endeavor.”  As it turns out, thankfully, no-one. At least no-one who has been caught red…ummm…handed.  As I stated from the beginning, the article was fake, but still, it made for an interesting little debate in my head as to what constitutes acceptable eyeballs for anal stuffing. And isn’t that what all good journalists should do?  Make their audience think!? 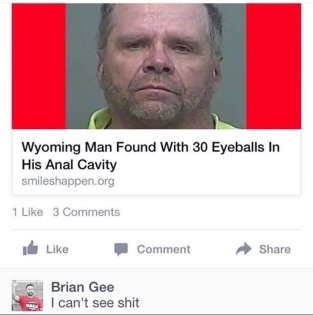