I’ve been thinking a lot about my Grandma Mooney lately. I’m not sure why. I joined a vintage photo group recently and it’s possible the old-timey photos remind me of her – I mean, many of the “mountain” or rural women from her era all look very similar; hair in a bun, house dress, a wearied expression on their face that makes it look as though they’ve seen it all (and probably have).  Winnie Mooney had a heart of gold underneath her massive bosom, however, there was a twisted edge to her sense of humor that still has me laughing to this day. I’m not sure what that says about me. But it’s probably why my mother always called me Winnie when I was growing up (just to be clear, it was meant as an insult).

If you recall, my Grandmother – great-Grandmother really – loved sending Vinegar Valentines; Valentine’s Day always brings her back to my memory too.  If you are newer to my blog, a Vinegar Valentine was a way of saying “Bless your heart,” that infamous southern loaded phrase.  She agonized over the perfect valentine to send to people she disliked, laughing as she sent it.  Although turnabout is fair play, she would get so mad when she received one.  These anti-Valentine’s Day cards were more popular for a while than regular cards.  I have a few people in mind that I could send some to, but alas, the practice has fallen out of favor…anyway, I digress.

Grandma Mooney and the rest of my Mom’s family lived in a holler.  For those who aren’t from the south, a holler is a small valley between mountains.  There was only one way in and one way out of the holler. Now you know what all those country songs are talking about. You’re welcome.

To digress one again, I got in trouble at school once for saying and writing holler when my northern-born teacher thought it ought to be “hollow.” Apparently, I wasn’t one to back down from a debate despite my young age. Seems my mother was not immune to the dreaded “parent/teacher conference” any more than I was when my kids were growing up.

Now when my mother was younger, about five or six or so, she had a young friend who lived down the dirt road from her, and he would come by her house to play with her. Or at least…he tried. For reasons unknown to anyone but herself, Grandma Mooney loved to prank this poor young boy.   No-one was ever able to figure out why; it was a secret known only to Grandma Mooney.  Knowing her, it started as a joke and was so hilarious to her that she just continued doing it.

And it went like this: my Grandma Mooney would pull a hideous Halloween mask over her head (and we’re talking back in the day when they really knew how to make Halloween scary), and would sit lurking…lurking…waiting for the boy to come up the road to the house.  Then, it was show time.

Grandma Mooney, in this creepy as hell mask, would pop her head up at the window just in time to scare this little boy half to death as he walked up on the porch.

The terrified boy would run home crying to his parents about the insanely frightening witch or monster that dwelled in his friend’s house.  The parents would march over immediately to find out exactly what was going on, as any good parent would do.

Grandma Mooney was ever the innocent hostess. I mean butter wouldn’t melt in her mouth when she put on her “who me?” act.  I can imagine her taking the parents in for coffee, all the while claiming she had no idea what the poor little boy was talking about.  She kept her bluff face on the entire time and never once cracked or confessed.

I don’t know if the little boy ever got punished for telling “wild tales.” Given the parenting techniques of the day though, I wouldn’t be surprised if a trip or two to the woodshed had been in order. What I do picture, though, is this child growing up and ending up in therapy, never able to trick or treat or watch a scary movie, or even believe his own eyes for that matter.

Word carries quickly in the usually close-knit communities in the mountains of WV.  I’m sure word got out about the demon? monster? madwoman? who lived in my mother’s house.  Amazingly enough, my mom still had friends who would come visit her. 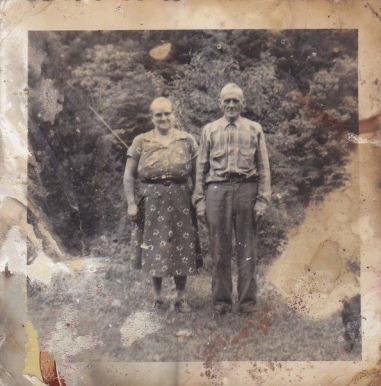 my great-grandparents (Grandma and Grandpa Mooney)