Lately, I’ve been thinking about relocating so I’ve been doing some light research on Zillow, realtor.com, and other real estate sites when I stumbled across one of the most bizarre postings I’ve ever read. Now, I’ve noticed the home seems to be making the rounds on social media lately (obviously I’m not the only person trolling real estate ads) but just in case you haven’t seen it, I thought I would share. Oh, and just for the record, while the “for sale” ad has been removed from Zillow and realtor.com (probably because it’s causing quite the stir), I did snag some screenshots which I will happily share.

Everything started out well and good with the listing. Just what you’d expect. The opening picture of the house was lovely. The information about the number of bathrooms and bedrooms seemed normal. The square footage was right in the sweet spot that most people look for. I thought to myself, “This house looks great” and continued to read up about it. It didn’t take long for things to take a very dark, very creepy turn for the worse.

photo courtesy of realtor.com – click picture to go to site where more pics are shown

The first cause for concern? There was a tenant still living in the house. That’s not weird in and of itself, but as the listing explained, this tenant cannot be disturbed and while he or she is on a lease, they pay no rent and cannot be evicted for non-payment. So, basically it’s just an entity floating around the property that you can’t get rid of or take any action to remove. Kinda sounds like a ghost to me.

Second cause for concern: While there is an upstairs unit to the house, as the post laid out in very clear, no uncertain terms, this unit cannot and will NOT be shown to any potential buyers under any circumstances whatsoever. It is strictly off limits. I kid you not, this is what it said. It sort of reminded me of Beetlejuice, when the new family moved in and there was no way to get into the mysterious attic. I picture in this house an impenetrable door with who knows what hiding behind it.

screenshot via realtor.com — info has since been removed

Third cause for concern: I was scrolling through the pictures and one in particular caught my eye. One of the doors is covered in some sort of red spatter. I’m not a CSI detective so I can’t confirm or deny what it may be, but one thing I know is that red liquid splashed along a broken door doesn’t bode well for the property’s history. 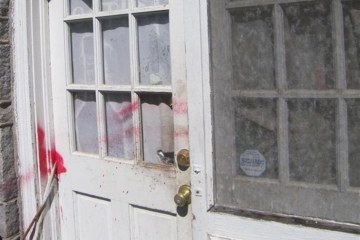 Fourth cause for concern: Putting on my sleuthing cap, I dug a little bit deeper and pasted together a curious timeline for this house. It was being rented out as late as February 28th of this year. The tenant sought was a professional couple or single. No mention of an off-limits section upstairs or a mysterious tenant — though an artist appears to be in residence.

Now, just a touch over two months later, the pictures of the house that are online show a dwelling in total disrepair. Walls are gutted. There are holes in the ceiling (I don’t even want to know). Floor tiles have been uprooted. Random junk and garbage are stacked both in and outside the house. Old, rusted appliances lean against the walls. Unexplained leaks coming from upstairs — which, isn’t that where the unseen tenant resides? I’m not going to guess as to what’s smeared on the walls. What the hell happened to this place in those two months? Or did it always look like that, even as it was being advertised as a rental property? If that’s the case, that’s pretty damn frightening, I must say. 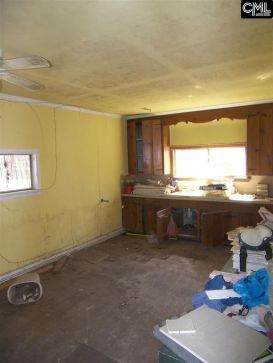 Now, normally I’d be all for living in a haunted house. I have no issue with ghosts. However, given these four points, I believe I am well justified in saying that we have the beginnings of a real-life horror story here — and not the fun variety either.

Honestly, isn’t this how horror movies start? A nice couple buy a fixer-upper. All seems well the first couple days into their renovation. Then, one night, a weird noise comes from the supposedly vacant upstairs unit. Later, doors that should be locked are left wide open. Next, strange signs that someone or something has been moving around when they’re asleep. All this leading up to the climactic moment when the unseen housemate bursts through the wall with a pickax trying to kill the unfortunate couple. Given how those stories normally go, the pickax wielding roommate is usually pretty darn successful in quenching their blood lust with their handy dandy farming implements.

So, yeah, I think I’ll pass on putting in a bid.

7 thoughts on “Horror House for Sale”