I was watching a Hallmark channel love story this past week – one of their typical “June wedding” movies.  And as I usually do, I had the captions on because, having the attention span of a gnat, I don’t always catch the dialogue of t.v. shows and the captions help. Usually. But in the case of this destination-wedding themed bit of escapism, the captions let me down. Big time.

I can’t be the only one to have noticed. I mean, I realize these movies cater to a very particular niche, but nonetheless, I’m sure they have a somewhat broad audience who, like me, partake in the weekly guilty pleasure. You’d think with the revenues generated by the romance industry, especially considering it’s Hallmark of all people, that there would be a higher quality of closed-captioning available. Well, you would be wrong.

Now, I realize that most captioning is mechanized these days and with automated translations come massive translation fails, especially when the actor on-screen is speaking a language the captioning program doesn’t understand.  I’ve seen some very good, high quality movies or shows where the caption states “Jane Doe speaking Vulcan…” or “John Smith speaking in High Valyrian,” which demonstrates an obvious programming flaw, but at least in those cases, even the caption program realizes, hey, I need to be respectful here even though I can’t make heads or tails of whatever it is they’re saying. If we’re really lucky, the movie’s internal production system kick in and the translation appears via subtitles built into the movie. Sadly, that’s not always the case, as proven by my foray into the wilds of Hallmark movies previously mentioned above.

So, as I said, the plot was centered around a destination wedding set at a resort in Acapulco, Mexico, complete with white sand beaches, turquoise water, the obligatory romantic tension between completely dissimilar people, and Spanish-speaking locals…you know how they do…in Mexico. With such a heads-up as to the setting of this movie, you’d think that a strategy would’ve been put into place to cover and possibly translate any oh, I don’t know, Spanish dialogue. But there, you would be wrong again.

I’ll set up one of the scenes in question for you – zoom in on a beachside table at which sits the starring couple, who just happen to have perfect teeth and great tans, and who also just so happened to be in love years ago though it didn’t work out because they were completely unsuited for each other and who now reluctantly find themselves thrown back together while planning the wedding of a friend and whilst doing so forget that they’re completely unsuited for each other and eventually fall in love all over again – but, BUT before they realize they are once again besotted with each other, it is time to try out different foods for the dinner aspect of the aforementioned wedding they are planning – hence sitting beachside, surrounded by food. Enter one Spanish-speaking local who, apparently flustered by the couple’s nitpicking at each other, does his nervous best to describe the food he has prepared – and the results are these impressively awful captions. 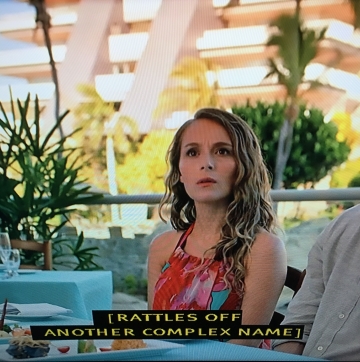 I don’t think that means what you think it means…

I pretty much had the same look of utter confusion, though admittedly my teeth aren’t nearly as perfect. So. Yeah. I’m hoping before Hallmark releases another movie with bilingual dialogue that they sort of up their game on the whole captioning thing — on so many levels. One can only hope, but in the meantime, I won’t hold my breath.