Tucked in between “news articles” about alien abductions and man-eating butterflies on the World News Daily Report, I found this gem hidden away.   Long story short, it claims that an elderly lady trained her cats to steal jewelry from her neighbors; the epitome of “cat burglars.” 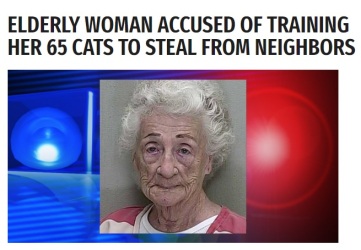 I admit, there is a part of me that wishes this was a true story.  I could absolutely get on board with training my cats to do cool things other than bringing me dead bugs. Let’s face it, though; cats only do what they want to do, and it always involves a smug, self-serving attitude and a “what’s in it for me” end goal.

I can see me, 20 years from now, in full Crazy Cat Lady mode.  I’d train my cats to do things like weed my garden, mow my lawn, put away the dishes, and fold the laundry.  In my fantasy, I am the ruler of the roost, the commander of the cats, the kitty whisperer.  The truth is, I live to serve my cats.  They have me so well trained that I respond to the smallest puking noises they make, even from a dead sleep.  I have given all of my furniture to them to use as thrones, perches, or beds.  I believe all of the cat food commercials I see, and my cats eat better than I do.  I clean litter boxes religiously and keep lint rollers to clean off the clothing that my cats allow me to wear when they aren’t using it as a bed.

On that note, the article makes me laugh when it references that these cats were voluntarily malnourished; apparently, according to the report, they deliberately made themselves seem skinny and underfed so that people would take them in to their homes to feed them.  After the neighbors opened their hearts and homes to the skeletal felines, the cats would abscond with anything of value.  Only then would the elderly cat-keeper reward them with food.

Really?  If I tried to train my cats this way, they would laugh at me.  “What’s in it for me? Better make it worth my while. And don’t even think about not feeding us, we know where the treats are. More important, we know where you sleep.”

Now I have no doubt that a cat COULD think of this clever scheme.  The only thing that keeps cats from taking over the world is the lack of opposable thumbs.  But would they really want to?  And perhaps therein lies the real reason cats don’t rule world…they simply can’t be bothered.

Now, let’s review the reasons cats would voluntarily choose to do something, heck anything, at all:

Lastly, let’s consider the odds of a cat being trained by a human to do something that he does not already want to do:

As much as I wish this story could be true, I think this will forever be relegated to the land of satire.

And that’s probably a good thing.