Is it true that all cat owners have lost their minds—or is it just me?

We choose cats because they’re supposedly less work than dogs. Cats are independent (which means they almost always come with an attitude). Cats don’t need as much attention as dogs to stay happy. Like introverted humans, they’re happy with alone time. You think they’re less demanding than other pets, until you have one, that is.

And then we do outrageous things that our cats didn’t sign up for in any way shape or form. We might dress them up in little socks or costumes. Or buy them harnesses and take them for walks. Or… ahem… put them in cat carriages so we can push them in a stroller while we walk.

As a cat owner, I can testify that we are all, in fact, at least a little bit crazy. Some of us more than others, if I’m being completely honest. It’s me. I’m some of us.

Well, the other day, I did something a little bit crazy for my evil feline friend, the ne’er-do-well. To be fair, this was my daughter’s big idea, not mine. I really don’t want to take any credit or have any part in this whatsoever… other than, you know, putting the plan into action so to speak. The ne’er-do-well is really my daughter’s cat, after all, and I think her fondness for humanity may stop there. I’m certainly not included in that benevolent bubble, that’s for sure. To say she is spoiled is an understatement. Of course, I mean Holly (aka the ne’er-do-well) and not my daughter. Um, yeah, right, of course… Holly.

So, what was this grand adventure, you ask?  A car ride.

It may not seem like a huge deal, but this car ride was Holly’s first time in the car where a visit to the vet or a household move wasn’t the final destination. Instead, we stopped at Starbucks for a Puppuccino… for our cat. Did I mention I haven’t seen my mind in a while?

Usually, Holly is content riding in her crate. Well, content isn’t exactly the word, but at least she remains civil. It’s all we can ask for, really.  But this time, my daughter’s big idea was to let her roam around the car so she could look out the windows and enjoy the ride. And by all appearances, she did enjoy the ride. She LOVED the Puppuccino. Yeah, I know. I did mention a certain someone was spoiled, remember? It’s up to you to figure out which one.

And hey, who knows, maybe this will create some good karma for me. I mean, I know that Holly has been plotting my demise for quite some time—hopefully, that Puppuccino will make her think twice. 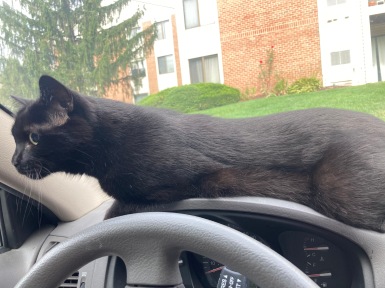 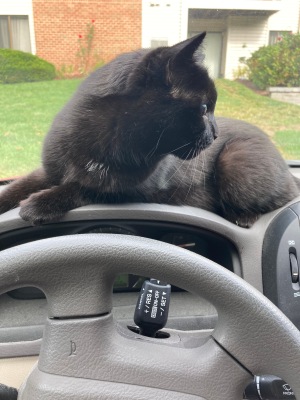 These were taken as we were parked outside of our building… Holly sat/was held quite contentedly and out of the way in my daughter’s lap for the actual ride.

2 thoughts on “The Cat in the Car”