The older I get, the more I realize that my mother was right after all. I am just like my Grandma Mooney.

Grandma Mooney & the Case of the Vinegar Valentines

Valentine’s Day always reminds me of my Grandma Mooney (more specifically, she was my Great-Grandmother). That may seem odd to some people (to think of grandparents around a holiday meant for couples), but there’s a reason behind it.  She was actually quite a colorful character… and then some. And one of her favorite things to do centered round Valentine’s Day.

It’s not really observed much anymore, but back in the day people would give out what were called “vinegar valentines.” They were basically insult cards with a caricature drawing on the front and a small acidic poem on the back that tended to call people out as being either foolish, a spinster, a loser, etc. You get the idea. They were pretty unflattering for the recipient and not exactly the heartwarming valentines we give out now covered in hearts and roses. Grandma Mooney absolutely loved giving these out to so-called loved ones and friends.

It was one of her favorite times of year because, while she may have been thinking these evil thoughts all year, now she was able to put those thoughts to paper. And let me tell you, she got serious pleasure out of poring over who would get what card. If memory serves they were sent out anonymously so the person receiving the snail mail insult couldn’t be sure who thought they were an idiot, but rest assured, someone out there in the world did. The ironic part is that Grandma Mooney would get super pissed if she ever got one. She sent them out by the bucketful but getting even one in return was blasphemous.

I wish I could’ve seen her face as she was picking out the cards and sending them out. It’s hard to picture without having seen it up close, but anytime Grandma Mooney was up to trouble, she’d laugh… not out loud… but sort of an internal laugh so that her massive bosom shook like jelly. Watching her go through her stash of valentines with an intensity more often seen in a tax auditor and the inevitable intervals of shaking as she came across just the perfect one for say… Georgie or Carlene… would’ve been a hoot. Although I’m just guessing that these two were among the lucky recipients.  Grandma Mooney always kept her list top-secret so no one could rat her out.

In truth, though, I almost wish more that I could’ve seen what she did when she opened up one that she had received. I’d be observing that from a very safe distance of course.  I mean, there’s just no sense in poking an already pissed off bear. Grandma Mooney would’ve made Sherlock Holmes proud though… because after receiving one of these heart to heart communiqués in the mail, she suddenly became a resolute and determined investigator, examining handwriting, postal stamps, and whatever else would give her a clue as to who sent it.  She’d wander around the house muttering names for a week as she narrowed down the list of suspects. And when she finally had that “eureka!” moment and was convinced she knew the perpetrator of this horrible crime, she immediately began planning the coming year’s list, editing it accordingly, and putting that person’s name in the top position. Ahh… it’s the simple joys that mean the most.

When I was young, my mother used to tell me that I was just like my Grandma Mooney. I’d take offense at that if I could only figure out how to argue the rationale. Admittedly, I can see the similarities — though not to the extremes of my enjoying sending anonymous insults. But I do share some of her ornery eccentricities. In some respects, it may seem like an awful comparison — but along with her cantankerous quirks, my grandmother had a heart of gold and took care of her family above all else. So I guess when all is said and done, I’m pretty happy to be compared to her. 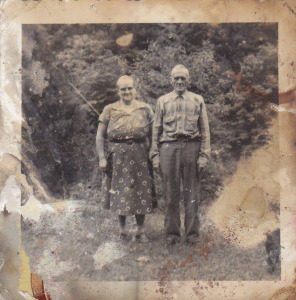