My lovely daughter is 18 years old today – no longer my baby, at least in her eyes. I would beg to differ. At any rate, this is how we roll in our house with birthdays: an Always Sunny cake and Starbucks. With chicken and dumplings for dinner tonight, and Wonder Woman on the schedule for tomorrow, life is good. Happy Birthday Sarah! 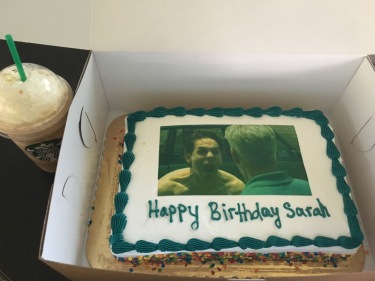 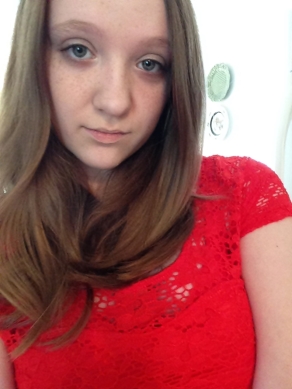 It’s just past midnight, so technically it is now my son’s birthday. The love of my life is 25 years old today. And I remember him learning how to walk as if it was yesterday. I’m going to reiterate something I’ve written before — as it still holds the same meaning in my heart now as when I first put it down on paper a couple of years ago. 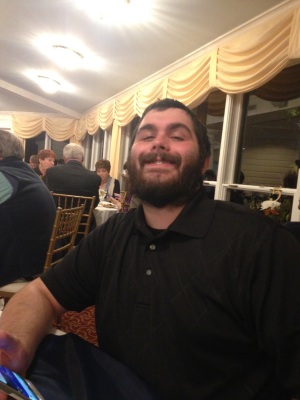 A carnival gypsy once told me that the love of my life would be tall, dark and handsome.  Somehow she failed to mention he would arrive on the waves of excruciating labor pains.  Now, 25 years later to the day, my son can legally buy alcohol, towers over me, and resembles Paul Bunyan.    He’s out on his own and I couldn’t be more proud of him. Still, whenever we talk, I oftentimes offer unsolicited advice.  No, really, I do.   Other mothers do this too, right?  Right??  Well of course Jake’s response is usually one borne of frustration because, according to him, I’ve not kept up with his birthdays all these years and therefore don’t know just how old he is.  My response is one he will never understand until he has kids of his own – he’s always my baby regardless of how old he may be.  Or how tall.  Or how thick a beard he decides to grow (I mean really, you do own a razor after all Jake!). 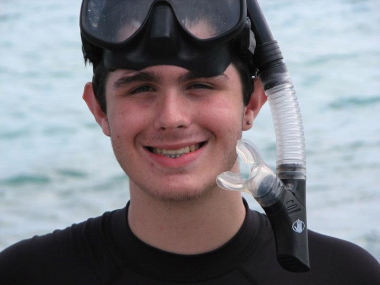 Yes, I do know he’s “all grown up.” But sometimes what I see in Jake’s face (despite his tall stature) is the same little boy who went out to play with me in the snow when we had a midnight storm, the small child whose laugh was forever a bright spot in my day.  He is still a bright spot in my day — our conversations always, but always, interesting and spirited with amazingly broad topics. He keeps me on my toes. Of course, I take credit for his love of Marvel Comics and the MCU, even though like Sarah, he knows more about the subject than I do. He has a strong work ethic, integrity, a desire to stand up for those he feels are maligned, and a good heart. In other words, everything a mother could hope for…and more. I could go on and on — but the point is very simple. I love my son. He makes my world a better place just by existing in it.

Perhaps his views will change when (and if) he has a child, but for now, Jake, as with most young people his age, doesn’t understand that when I look at him, I still see that wide-eyed, precocious boy who stole my heart the day he was born. 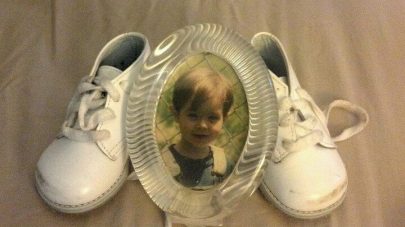 So, I’m celebrating both my birthday (thanks Mom!) AND the anniversary of my blog. Actually my 3rd blogiversary was December 19th, but oh well. Close enough. I’m thrilled to be writing and continuing on with a project that I wasn’t quite sure about at first. As for my birthday, it’s been uneventful, which in my house is a major accomplishment. Friends and family always make life worthwhile and for them, I’m grateful.

As I ponder my life, the year to come, and just the world in general, I think more and more about mortality and hopefully when it IS my time to go, it will be via some means that I can at least understand. You know. Like a rabid badger or pissed off squirrel or anvil out of the sky…maybe even tripping over nothing and choking on cake batter.

A carnival gypsy once told me that the love of my life would be tall, dark and handsome.  Somehow she failed to mention he would arrive on the waves of excruciating labor pains.  Now, 23 years later to the day, my son can legally buy alcohol, towers over me, and resembles Paul Bunyan.    He’s out on his own and I couldn’t be more proud of him. Still, whenever we talk, I oftentimes offer unsolicited advice.  No, really, I do.   Other mothers do this too, right?  Right??  Well of course Jake’s response is usually one borne of frustration because, according to him, I’ve not kept up with his birthdays all these years and therefore don’t know just how old he is.  My response is one he will never understand until he has kids of his own – he’s always my baby regardless of how old he may be.  Or how tall.  Or how thick a beard he decides to grow (I mean really, you do own a razor after all Jake!).

And many times during these mutually frustrating conversations, a mental picture of him will pop into my head.  Like when he and I went outside to play in the yard like maniacs during a freak midnight snowstorm when he was 4.  Or when he was a very convincing snowman in a school play at the age of 5.  Or as a 6 year old on a trip to Luray Caverns….which is actually a pretty cute story and one that I go to often in my mental rolodex of memories because it never ceases to make me smile.

We used to make the trek to Luray Caverns every year, sort of a family tradition.  These trips were always a great time.  For those not familiar with the area, near Luray is another set of caverns touted as “The Endless Caverns.”  To me, that sounds sort of horrible. The idea that you could possibly get lost and never find your way out of the dark, stone tunnels, eventually succumbing to starvation with your body going undiscovered for maybe centuries didn’t fill me with a great amount of intrigue.  Sort of like an “always erupting volcano” or “constantly snowing tundra.”  Okay fine, maybe that’s a bit melodramatic….but hey, it could happen.

Well, on this particular trip when we passed one of the billboards emblazoned with “Endless Caverns” Jake asked just what “endless” meant.  Remember, he’s only 6 at the time so he was still trying to figure out the intricacies of the English language which can be tough on anyone.  Being the vocabulary nut I am, I was thrilled to explain to him “Well, Jake, endless means that something doesn’t have an end…. never-ending.”

This is where I have to take a small sidebar and let you know that my husband’s running compliment for me at that time was “hot.”  It could also be interpreted as a running joke.  And having the goofy mentality that my husband did he was always coming up with a “you’re so hot…” comment.   As in “You’re so hot you make lava look cool.”  I know, I know….but what can you do?  I married him anyway.  Not sure what that says about me, all things considering.

So, back to the story….as the meaning of “endless” registered with Jake, he perked up and said, “Oh, so it’s like you. You’re hotless.  Never-ending hot.”   Why yes, Jake.  That’s exactly what it means.

To this day I hold that small, innocent remark in my heart as one of the best compliments I’ve ever received.  Not because it’s true and certainly not because Jake fully understood “hot” as it related to women,  but because it came straight from his beautiful, ever loving six year old heart as meaning something special.  Jake will never understand that when I look at him, I still see that wide-eyed, precocious boy who stole my heart the day he was born.   I don’t think that will ever change.  And quite frankly, I hope it never does.

Although seriously…. a razor wouldn’t hurt now and then. 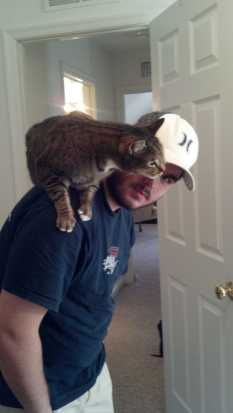 In the past few years my family has transitioned from something out of Full House to something more akin to Arrested Development. No, I’m not saying that we’re all in danger of going to jail for a slew of financial crimes (including light treason) and building houses in Iraq. What I mean, is that while we used to be all lovey-dovey nice to each other (at least where card-giving holidays like birthdays are concerned), somewhere along the way we changed and found out that using insults and sarcasm is a much more fun way to tell someone how much you cherish them. Only makes sense, right?

It’s become common practice for all of us to get each other the most mean-spirited (or sarcastic) cards we can get our hands on. And we have the best time shopping for these things! Standing in the aisle of the card store, grinning from ear to ear, oftentimes laughing out loud, and looking like an absolute fool as we pour over the selection combing for the perfect card.  It’s actually quite reminiscent of Grandma Mooney and the Case of the Vinegar Valentines, but without the malicious intent.

If age isn’t an easy target, don’t worry, we’ll find something to harp on…the choices are abundant once you really start looking through the card section. One loving daughter (I won’t name who) gave her mom a card that joked about how her breasts have a much closer relationship to the floor now than when she was younger. Hardy har har, right? Again, not exactly zingers from MENSA, but you get the point.

The really funny part is that it didn’t use to be this way. We used to play nice. We’d go the Hallmark route and buy cards with pictures of kittens or lovely scenes all over them and sweetly worded verses inside. Then this evolution happened and now it’s all out warfare in the stationary section. I don’t know what caused the change or who initiated the mean streak, but it’s been holding strong and has even been spreading to extended members of the family. It’s become disappointing to us when we receive a “nice” card…and it makes us rack our brain trying to figure out just what we did to annoy the giver that they felt the need to get us a “nice” card.  I know.  We’re weird.

No one is safe. Mothers, fathers, brother, sisters, aunts, uncles…all are fair game. And we’re not confined to just blood relatives either. Oh no no no. You come into this family and sure, we’ll let you have the nice heartfelt marriage. We’ll get you the gifts off your registry and we’ll tell you how happy we are to have you in our family (all true by the way).

But after a few years, when you’re good and hunkered down and we’re pretty certain you’re no longer a flight risk, we’ll take the kid gloves off and really let you into the family. After this proverbial “waiting period” you’ll know you’re truly part of the clan when on your birthday you get a card that implies you need to up your meds rather than one that gushes over your virtues (which I’m sure are very valid and gush worthy). A card that will hopefully make you laugh as much as we did when we picked it out.

Hurray, you’ve finally been accepted into the fold! That’s love right there. Because that’s how our family rolls. 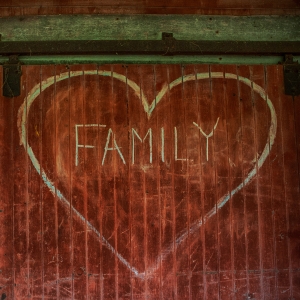