I saw you today. You there in the white pick-up truck. During that fleeting moment we shared on a quiet back road, I could only see that you were likely middle-aged, and had a beard. To all appearances just an ordinary person going about their ordinary day.

But I saw you as you slowed down and purposely moved over to the side of the road so as to avoid the indecisive squirrel on the middle line, allowing him the opportunity to find his way to the tree-filled lot on the other side … still breathing, still intact, unharmed. Hidden away from the masses — only through fate and good timing was I even in a position to bear witness — you chose to do the right thing. I thank you for it. I know the squirrel thanks you for it. His life has meaning, just as ours does, and you saw that, appreciated that, and acted accordingly.

When compassion reigns, we are all the better for it. So, thank you. With your conscious – or unconscious – empathy, my hope in humanity was restored.  At least for today.

Kids can be so cute, can’t they? The way they have endless curiosity about everything they see; their exuberance over new experiences that we have grown jaded to and take for granted; the wide-eyed openness to everything the world has to offer regardless of how taboo, odd, or grotesque. They’re simply amazing.

Take this video of a little girl traipsing around her front yard playing lovingly with a dead squirrel:

If it were a doll or a stuff animal or a photo of a family member I’d be letting all sorts off oohs and awwws escape my mouth. The only thing holding me back from sharing in her happiness is that it’s a freakin’ dead squirrel! Mouth agape, eyes rolled back in its head, limbs hanging heavy, neck slack, this squirrel is deader than dead. And recently dead. As in their dog just killed the poor thing. So of course, why not let the kid play with it. It’s the natural order of things, right?

I don’t wag my finger at the girl, though. She’s so young, she obviously doesn’t understand what her newest toy actually signifies. I’m more angered at the parents. The Dad who saw this as the perfect opportunity to grab a camera and film his daughter being so oblivious that it’s “cute” and the Mom who can only stand there, hands on her hips and smirk on her face, looking at the camera with an inner monologue that screams, “Don’t kids just do the darndest things!?” What is wrong with these parents?

You don’t have to agree with me, but in my opinion the Gods that be (or whoever you want to name) just gave them an absolutely perfect teaching opportunity about oh, I don’t know, empathy, compassion maybe, life being a sacred thing, and they squandered it. This could have been a prime moment to impress upon their child a lesson about the sanctity of life, the inevitability of death, and the respect that we can show the dearly departed. But no. What do they do instead? They mock the animal that tragically lost its life (in the jaws of the family dog no less…not even a natural death) and turn what could be a window into the frailty of life into playtime. The little girl sees the squirrel as a toy (again, not blaming her for this because she’s too young to know any different) and the parents just go along with this little show, encouraging it even — with the Dad calling the dog into his video masterpiece so he could introduce “the killer and the killed.”

I could also go off about the fact that his kid is rubbing a dead carcass all over her naked chest and the obvious health implications of that. I’m not saying that the squirrel definitely has fleas or a virus or a disease or whatever, but until I’m 100% certain a wild animal corpse isn’t going to pass along some transmittable illness, I wouldn’t want my kid laying a finger on it let alone using it for playtime. But I’ll let the other YouTube comments harp on that point.

My main concern centers around this one question: Where is the empathy? Clearly not with the parents and because of what they are either knowingly or unknowingly passing on, the kid has none either. What message does this send to their child? Sure, it’s all fun and games for now, but I wonder what they’ll do when she drags home a dead dog to play with.

I am a bad parent. Everyone says so. It must be true. My children were raised with empathy (oh my god!), compassion, lots of books, more hugs than you can count, and the idea that knowledge is paramount. Having these lessons also instilled in them a sense of independence and, I hope, a feeling of self-worth. They are certainly both individuals that I respect. And there I go again. As a parent, I should be proud (which I am, big time) but very few parents express respect for their children, especially if they’re young children. But there you go. I’m a bad parent. Just ask anyone.

In this crazy household of free thinking, my kids have come to find their own path in religion as well as other things. My son Jake leans towards Zen Buddhism though he can debate the philosophies and merits of pretty much any belief system. With his intelligence and insightful nature, it’s not surprising he is drawn to Zen Buddhism; it fits him very well.

So far my daughter Sarah is an atheist. I say so far, not to belittle her way of thinking, but because she’s only 14 and very well may change her mind. If she doesn’t, I say good for her. Everyone needs to find their own way.

Even as a small child Sarah has always known her own mind and while some parents would attribute that to insubordination or disobedience, I’ve encouraged this behavior. In a world chocked full of mindless followers, possessing a streak of independence is more than okay by me. It’s made for interesting times, that’s for sure. And many trips to school. I’ve definitely had my share of chats with teachers. Not due to behavior, because Sarah is always well-behaved in school, but rather because if she realizes an answer is right or a teacher is wrong, she won’t back down from the truth.

For instance, I had to have an extremely bizarre conversation with a 4th grade science teacher about Okapis and how they do in fact exist in the real world; they are not the stuff of imagination like unicorns and mermaids. Did I mention this was a science teacher? Sarah had brought up Okapis in class one day and had been told plainly that she was wrong and had made them up. Not one to back down, Sarah insisted Okapis could even be found at the Baltimore Zoo (which is where we had seen one). Sarah’s insistence on the poor Okapi’s existence won her a note home and me a trip to school. It was a true testament to the quality of our school system but also a prideful moment in that Sarah wasn’t intimidated by an authority figure into believing she must somehow be wrong when she knew she was right. Perhaps I am a bad parent after all because instead of lecturing her on the merits of “going along” or how “teachers are always right,” I commended her for sticking to her guns in spite of her natural reticence.

I’ll admit that they’ve both tried my patience over the years and some of the most frustrating conversations I’ve had with anyone ever, have been with my kids. Especially Jake. But then, I’ve also had the most stimulating and thought-provoking conversations with Jake as well. I’ll happily take it all. I can certainly understand why his teachers both loved and hated him though. He’s intelligent enough to seriously debate all sorts of topics which is a good thing. However he’s never been much of a follower and therefore draws his own conclusions, which, in a teacher’s eyes, isn’t exactly a good thing. Most teachers want students who simply repeat the lesson’s objective verbatim, not those who think for themselves. Jake’s open mind and intelligence with which to back it up was a source of exasperation for his teachers I’m sure. Let’s just say I’ve attended some pretty noteworthy parent/teacher conferences in my lifetime. But then, in our school district, Okapis don’t exist. So you can see what we’re contending with here.

Suffice it to say, no matter what I do in life, my kids are my greatest source of pride. They’ve turned out pretty well in spite of my bad parenting. I’ll gladly (and very selfishly) take the credit for how they turned out….but, and maybe more importantly, I’ll even more gladly take the blame for what others perceive as flaws. In my opinion, the world needs fewer “cookie cutter” personalities and more free-thinkers.

So to those who call me a bad parent (and you know who you are), go ahead. I’m the worst…and couldn’t be happier about it. 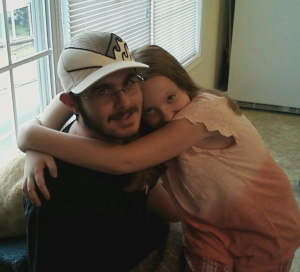