I never got the chance to meet my biological grandfather, Arbrie Emil Mills. He was killed when a coal car cut off both his legs when he was working in the mines of West Virginia in 1942. It was the definition of a tragedy. My Grandma Jimmie was pregnant with my Mom at the time and it took my Grandmother many, many years to recover from her loss and move forward. Eventually, Grandma Jimmie did remarry — my mother was married herself and had a family of her own by then. My brother was 7 and I was 5 the year we met the big hulking bear of a man we knew as Grandpa Walker. Everyone called him Clark but his name was Champ. And he was as big as a mountain. He must have really loved my grandmother to plunge headfirst into the craziness that was my family. That, or he was already crazy to begin with.

I can’t say what kind of man Arbrie was since he had passed long before I ever existed, but I can say with certainty that Clark Walker seemed tailor-made for my Grandma Jimmie. My only wish is that they had found each other sooner so my grandmother wouldn’t have been alone for so long. She was a firecracker who loved to argue and instigate and thanks to her sharp mind and quick wit, she was good at it. Clark put up with all her quirks and shenanigans — in fact, he seemed to enjoy it. The household walked on eggshells — make that quilt-covered eggshells — all morning until she woke up, which was usually around noon. (I tell you what though — looking back on it now as an adult with kids, my Grandma Jimmie spent the better part of her life busting her ass to put food on her family’s table, shoes on her kids’ feet, and did everything she needed to do to keep her family together in the mountains of West Virginia, so if she wanted to sleep till noon later in life, I say, more power to her.)  But, my Grandpa never questioned her need for sleep, never tried to change her routine. He just accepted it as the way things were and put up with it because he knew it made her happy. The sun rose and set around my grandmother as far as Grandpa was concerned.

Need an example? How about this… ever heard of a Jimmy truck? It was a kind of pickup truck with a cap on the back. They don’t make them anymore, but they did back in the day. Grandpa bought one of these trucks (in cash!) just because it had my Grandma’s name emblazoned on the back. Well, slightly misspelled, but still. His heart was in it.

Perhaps the clincher that proved just how much he adored my grandmother was the fact that on top of living with her and her persnickety ways, he also lived with my great-grandmother, Grandma Mooney. I’m sure you remember her. Yup, Grandma Mooney of the Vinegar Valentines and the Spooky Charades was in the house as well and as we all know, she had quite the attitude. The apple doesn’t fall far from the tree, as they say, so my grandfather was a little outnumbered. In spite of all this, my grandfather took damn good care of Grandma Mooney when she got sick later on. All because he loved my Grandma Jimmie with a love that was fierce.

Growing up, I thought Grandpa Walker was IT.  As an adult, there are some stories I’ve heard that tarnish my memory of him which, sadly, happens all too often with our childhood memories.  But, I also remember he gave me a kitten when I was little that I wasn’t supposed to have. (He gave my brother one too, but my brother was deathly allergic — which made shoving the kittens in his face really, really fun, but I digress.)  We couldn’t take them home of course… thanks bro, for that. But we enjoyed them each summer.

While I was small, most summers found me by his side, when I wasn’t chasing lizards or looking for crawdads or swinging from grape vines. When I was still a little girl, it might’ve been the first summer I met my grandfather even — so maybe 5 — I remember trying to cut my fried eggs with a fork and knife just like my dad. My dad was amazing with a knife and fork — he could cut anything and everything slick as butter while being quiet as a mouse. It was truly impressive, and I always wanted to be like him. But, I could never come close to being as fast and neat as he was and most of the time I just ended up making a big racket. It was certainly annoying for everyone in the kitchen. So anyway, here I am cutting my fried eggs like a maniac and my father ummm…chastised me, yeah, we’ll go with that, chastised me for making so much noise. And sitting in “my spot” next to my grandfather as I was, he yanked my chair closer to him and told my dad in no uncertain terms to “leave her be and let her cut her eggs however she wants” — which was awe-inspiring really because I was little and my dad was…well DAD. You simply didn’t talk back to him.  Clearly Grandpa didn’t get THAT memo. Or if he did, he didn’t care one bit.

As I’ve written about before, for a part of his life my grandfather drank beer like some people drink soda, or coffee. He basically just drank the stuff all day long. It took an enormous amount (about the size of a silo) to give him a buzz, but eventually he would start feeling the effects, and when he did, he’d get on a musical bent. When this creative urge came across him, out came the banjo which he was really quite good at playing. The tunes he chose? Yeah, well, those started out pretty good too, more on the bluegrass side but that was okay, and then it would slide into gospel, getting faster and zanier the more he drank. Verses would eventually repeat themselves, words would slur or get mixed up. Sometimes it was an outright free-for-all of different songs thrown together as one. What verses he couldn’t remember, he made up on the fly.

I remember my mother made a recording of one of his more lively sessions and took it to my Aunt Bunny for her to listen to — back when cassette recordings were still the rage. I got so angry because by the end of the impromptu concert they were in tears laughing at his madcap musical antics. I snapped at them over it and ended up paying the price. And of course, looking back on it, it WAS funny… hilarious even. But this was my grandfather they were laughing at! No-one was supposed to be laughing at him! 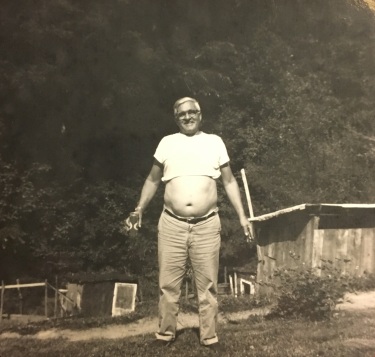 I’ve been thinking a lot of my beloved Grandma Mooney (great-grandmother to those just tuning in).  Thank you for letting me share her stories with you all; I think you’ll agree she was a very rare and highly entertaining individual indeed.

Now, I do dabble a bit in the occult.  I love giving or receiving tarot card readings.  I also strongly believe in ghosts to the point that I would never dare make one angry, or even dream of playing the Ouija board alone.  I strongly believe there is more to this world than our limited five senses can ever know or that science can prove or disprove, at least for now – I mean we’re learning more and more every day about the world around us, right? Who knows what they may find out.  I also strongly believe that you should agree with me, or I will use my ancient Voodoo magic to hex you.  Nah, just kidding on that one, but I am a firm believer in the paranormal in general.

Grandma Mooney had a unique ability that luckily, I did NOT inherit…it can’t have been pleasant.  It wasn’t a super power like flying, freezing time, or moving things with her mind (seriously though, how cool would that be!?), but it was a spooky gift for sure.  Grandma Mooney always knew when someone was dying.  She never got upset; she was completely matter of fact about it.  She’d get the feeling in her bones (I assume it was her bones at any rate), and just nonchalantly announce, “John’s dying.  Gotta go,” and then she’d be off, to go help the family.  Without fail, whoever the unfortunate soul was that she would name would either be on their deathbed or dead before she even got there.  Of course, back then there was no Facebook, no cell phone texting, and no emails; this gift was pure intuition. She was always accurate, and it was really, very creepy.

While we’re on the subject of death and dying, did I tell you about the time I almost killed Grandma Mooney?  If it wasn’t my fault, it might have been her sheer orneriness. Let me explain…and spoiler…there was a happy ending, no Grandmothers were hurt in this story.

My grandfather, god bless him – I loved him to pieces – enjoyed three things in his life: playing the banjo, singing, and drinking beer. He drank beer like some people drink soda pop or ice tea. And for the most part, he could handle his alcohol. Later on in life, he decided he’d had enough and just stopped, cold turkey, and never looked back. But back in the day, when he was especially deep into his cups, he liked to get out the banjo and entertain all and sundry – with bluegrass and hymns being his favorite music of choice. The more beer he drank, the more boisterous his hymns and bluegrass songs would become.

This one particular day, when I was 7 or 8 years old, Grandpa Walker was really going at it with his hymns while Grandma Mooney ate a piece of cornbread.  You may know, old-school cornbread was really dry and would fall apart when you ate it.  Anyway, I got really carried away by grandfather’s music this day, and before you know it, I was howling like a dog on the front porch. Yeah, I was an ornery child. Like great-grandmother like great-granddaughter.

This tickled Grandma Mooney to the point of laughing her ass off, but as luck would have it, she started choking on her cornbread.  I was so scared that I ran away for the rest of the afternoon.  No way was I going to stick around to see what happened!  All I know is Grandma Mooney was laughing and choking, so I did what any reasonable 7 or 8-year-old kid would do; I ran for the hills.  Not my bravest moment, to be sure.

One thing was guaranteed.  If she actually did die choking on cornbread, she would definitely come back to haunt me.  And if she didn’t…

…she was definitely going to kick my ass.