Although she has known me, literally, all her life, apparently I still surprise and amuse my daughter with my speech patterns. Oh, not the cursing, that she just takes in stride. But some of the figures of speech I come out with are simply too much for her to deal with, I guess. Some of this is caused by the fact that I’m old and she’s well…not old, and so many things I say are dated and unknown to her. A few of the phrases I spit out, the non-curse word ones that is, no doubt come from being raised by Appalachian born and bred parents. So I can see why my language choices might be slightly confusing to my daughter who has had a completely different childhood.

It does make for interesting conversation at times. Especially during our road trips, when I shout something particularly wrathful, I feel, at the driver in front of me, yet the effect on the smart-ass sitting in the passenger seat is one of great amusement. Or we’ll be having a perfectly civil conversation and without thinking, I reveal yet another unheard-of gem and the disbelieving eye-rolling begins. Because, you see, it’s not that she thinks I’ve lost my mind, but rather, that I’m an idiot who doesn’t have a keen grasp of my native language.  And really, who can blame her? If I didn’t know better, I’d think some of these phrases are made up as well.

Then of course, out comes the long-winded explanation to prove that no, I haven’t suddenly gone daft, only to be told “that makes absolutely no sense” with that lovely tone of disdain only a teenager can properly produce, to which I respond – with utmost maturity mind you – yeah, well, you don’t know everything and then proceed to stick out my tongue.

While writing this, I could not for the life of me recall all of the phrases I’ve used that have tickled my daughter to no end. However, I did start a list with the few I could remember and will update it on occasion as more spring to mind or mouth.

Piss or get off the pot.

You don’t have the sense God gave a stump.

I’ve got no dog in this fight.

Dressing up mutton and calling it lamb.

If I had my druthers.

Rode hard and put up wet.

Hair of the dog.

I’m no professor of linguistics, but I do understand that language evolves over time. Pick up a copy of Canterbury Tales or Satyricon and try to tell me you understand every phrase in there. What I didn’t think too much about until recently is that this constant updating, re-purposing, and hijacking of words and phrases applies to cursing, too.

An article I read recently went into great detail about the role that profanity played in the Elizabethan Era. How it was aligned closely with divinity (the word “God” being used in many of the harsher swears of the time) and of course social status.

It’s a very informative read and I got a lot out of it, but the part that really stuck out to me was the very first paragraph which reads:

“In Henry IV, Part One, Shakespeare’s Hotspur turns on his prissy wife: “Heart! You swear like a comfit-maker’s wife. ‘Not you in good sooth!’ and ‘as true as I live!’” Instead Hotspur demanded a good mouth-filling oath. Something like his own “By God’s heart” was more suited to a lady of rank.”

Shakespeare, you know how to write a good story, I’ll give you that. And you’re phenomenal at coming up with new words. But, you’re one sexist bastard. I am more than aware that misogyny isn’t a new trend that just recently popped up, yet that passage by Shakespeare had me shaking my damn head. Leave it to a medieval patriarch to think that his wife needs to improve the language she uses and then offer up suggestions. He’s literally trying to put words in her mouth!

And I’ll admit, I had to look up just what the hell a comfit-maker was because while it sounded familiar, I couldn’t put my finger on it. Turns out that’s just a fancy way of saying candy maker. Back in Shakespeare’s times comfit-makers were the people who made little confections out of dried fruits and nuts that would then be used in desserts… nonpareils, sugar plums, candied almonds, hundreds and thousands (aka sprinkles or jimmies) and the like.

To be honest, being a comfit-maker’s wife doesn’t sound like a bad gig. Sure, if I were living back in the 1600s and was hitched to one of them, I probably wouldn’t be too well off financially. Or socially for that matter. I mean, how much can a bag of candied almonds bring in really? But still, I’d have all the candy I could eat. More importantly, I’d be able to curse however I wanted. Except if it got me sent to the stockades. You gotta watch out for the stockades. 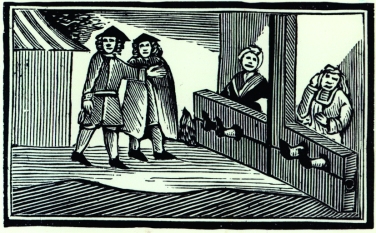