So with Halloween right around the corner and enough horror movies marathoning on t.v. to make my twisted little heart skip a beat, I’ve been thinking about monsters and ghosties and boogeymen more than usual. I thought I would revisit an entry I did a while back…to sort of garner a bit of sympathy or empathy (?) for the “other side” as it were.

There was this movie that came out in 1989 called Little Monsters starring child-actor-of-the-decade Fred Savage and Howie Mandel in a career defining role as Maurice, the monster who lives under the bed in a world full of ghouls and goblins. Sort of like a live-action Monsters Inc. In the movie Fred Savage’s character gets taken into this netherworld and learns that those scary spirits under his bed are by and large pretty fun-loving dudes who just want to live their life and have a good time.

Why did this thought come to me? My mind is hard to shut off sometimes and one night when I was attempting (unsuccessfully) to doze off, I noticed the light in my bedroom closet had been left on. I didn’t remember leaving it on and couldn’t recall even being in the closet at all that day. It made me think about just how long the light had been burning before I noticed it. And then, as so often happens to me late at night (or any other time if I want to be completely honest), my mind wandered off the rails.

Lying there in bed I thought that maybe it wasn’t me who turned it on. Maybe it was a boogeyman. And if it’s a boogeyman, what if he’s afraid of the dark? What if all these monsters children grow up fearing are simply misunderstood creatures that have been swept under our beds or crammed into our closets because eons ago humans forced out all the boogeymen so we didn’t have to cohabit ? Is it possible that the monsters under our bed are refugees? Did we put them there centuries ago and now they only come out at night when they know we’ll be asleep so they won’t run into the scary humans?  But….they’re afraid of the dark.  So once in a while as the others are huddled around trash-can fires in their ghost world, a few adventurous boogeymen (probably children boogeymen…because I doubt the grown up boogeymen can control their kids at all times any better than we can control ours all the time) step out into a human’s closet and, frightened by the shadows and odd shapes that the clothes and sundry items make on the wall, they turn on the light.  Perhaps they are just misunderstood, much like Maurice and his brood, and we should really just hand them a flashlight instead of screaming at moving shadows.

That would definitely account for why my closet light is on…I mean it makes sense, right?  And if there really is a boogeyman in my closet who is afraid of the dark, who am I to get up and turn the light out on him thereby frightening him to death?  So I stayed in my warm, cozy bed, looking at the soft light beaming out from under the closet door and I pondered the various underworld creatures who might benefit from some night-lights and a little empathy.

Yes folks, this is what I think about as I’m trying to pass out after a long day. Maybe instead of worrying about spearheading humanitarian efforts to create a cross-species allegiance between humans and monsters I should just go to Walgreens and buy some Zzzzquil. 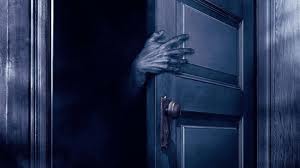 Please sir…can you spare a flashlight…??