You know that feeling when time flies while also creeping by at a snail’s pace?  That’s been my week. I swear, it’s been the longest decade to ever fly by. Anyway, I know I owe you a proper blog entry, but instead, you’re getting a photo.

It’s been rainy and windy here this week, and I say that to sort of maybe explain the below. I came across this one day late this week, smack dab in the middle of the walk leading to my office’s door. 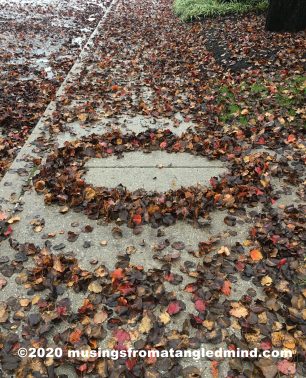 Now, I know that this interesting sight was caused by a little whirlwind — the leaves spinning around and landing in a perfect circle because of a small pocket of turbulence where the air currents were forming a little eddy. But the dreamer in me prefers to think of fairies or wind sprites playing in the early morning mist… though what they were doing in a business park, I have no idea.

It was a bit sad that upon heading home that day, the leaves were back to their boring positions spread slapdash across the walk. But there for a moment, Mother Nature’s artistry sure made a dull day brighter.

A couple of weeks before we moved, I was walking the dogs in the backyard during a short respite between bouts of rain.  There is some kind of a pine tree at the far edge of the yard, I don’t know what kind … only that it has drooping limbs, and it caught my eye because of the rain that had accumulated on its limbs. The drops just sat there, in perfectly round little beads, clinging daintily to the needles. From a distance, the shimmer almost looked like frost. Now, I’m not great at taking pictures, and all I had was my cell phone, but I couldn’t walk away without trying to capture such a beautiful — and cool — sight. Mother Nature. She sure is something. 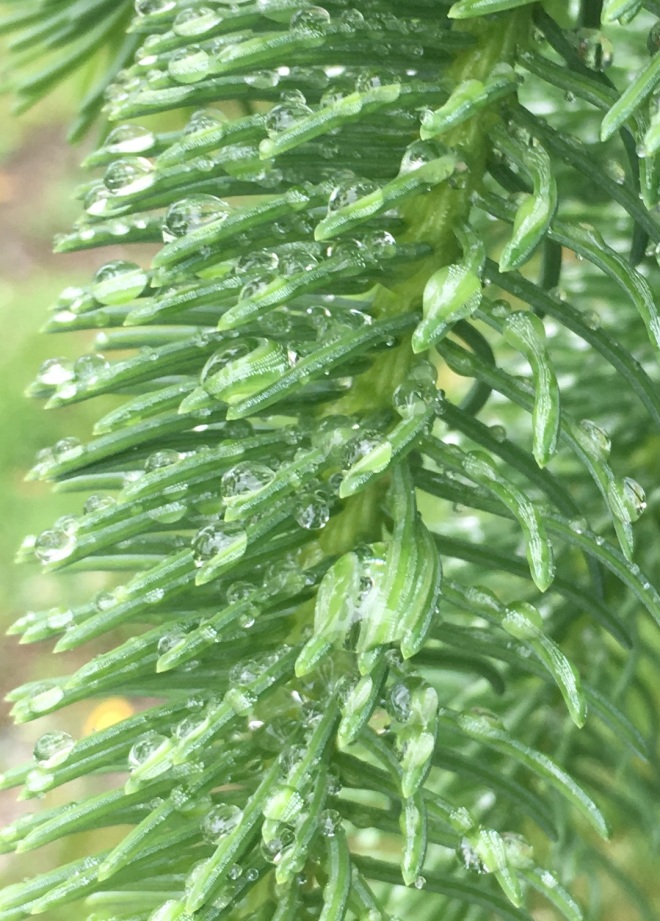 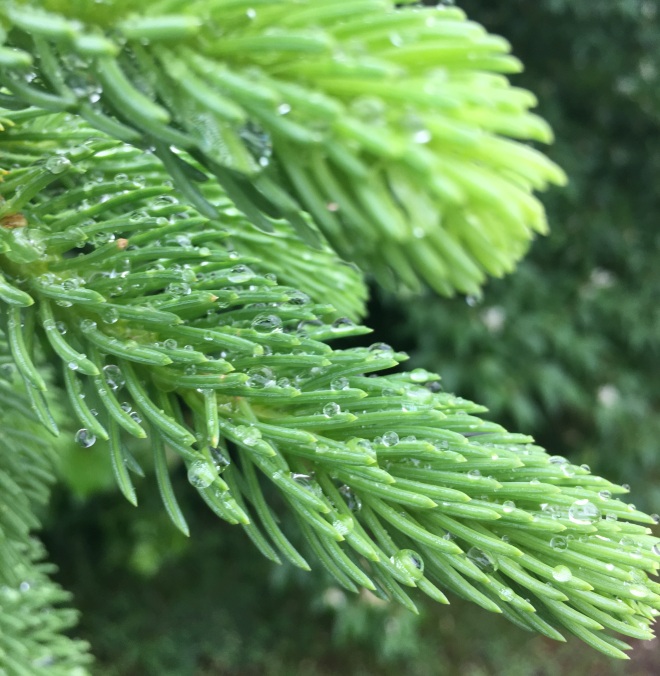 It may be a couple of rungs down from Dr. Doolittle level but over the years my mother has slowly worked her way into the role of Queen of the Squirrels within the local rodent community. I don’t know if this has been an intentional plan of hers that she’s been rolling out over time, but she’s been feeding the squirrels in her backyard for so long now that not only are they not afraid of her, they in fact bask in her aura of generosity.

As soon as she graces them with her presence in the morning by stepping onto the back deck for her morning coffee, her robe draping off her statuesque form like a regal cloak of benevolence, the squirrels scamper about her feet, clutching meekly at the bottom of her dressing gown in a silent plea for the peanuts they know she has in her pockets. And as she seats herself on her queenly throne, the frequent flyers of the group gather to sit at or on her feet.  If she doesn’t see them (because she’s on the phone with me let’s say), they ever so delicately tug at the material to get her attention all the while gazing up at her with loving reverence.

I’m hoping for her sake it’s “gazes of love” and not that crazed look so often seen amongst mutated wildlife in B horror movies:  “feed us now or we’ll surround you and chew your face off!”  It’s so hard to tell with squirrels.

I’ve walked down busy sidewalks in major cities and the squirrels there just barely move out of the way of getting stepped on and that’s normal to see, they’ve grown accustomed to humans and live/react accordingly. But my mother’s squirrels (good grief…now I’m thinking of them as my mother’s squirrels) don’t just politely avoid her as they share the yard or the deck for their morning constitutional…oh no…they seek her out! It’s gotten to the point that she’s given them names! I have to admit though, if I had squirrel worshipers, I’d name them too.

It’s the same routine every day. She wakes up, the squirrels hear her stirring in the house, she comes out with her coffee mug to take in the fresh morning air, and suddenly, they start appearing from hither and yon to sit patiently waiting for her to distribute her stash of peanuts. They each vie for her attention, trying to win her favor and earn a precious, delicious nut.  Should she run out and need a refill, no fear…they simply wait for her to return.

This would be “Sweet Pea.”

Now if for some reason, the squirrels don’t see her come out because they’re preoccupied doing their squirrelly things (this is usually in the afternoon, well after their morning meet-up)…all my mother has to do is make a noise I can’t spell but somehow involves clicking her tongue. Oh boy, you’d think she had just rung a dinner bell for all and sundry!

And it’s not just squirrels. Oh please. She’s no amateur, my mother.  She’s a friend and kind-hearted matriarch to all the creatures in her kingdom. Whenever I talk to my mother in the afternoon, she always seems tired. I know why. It’s because she has so many mouths to feed (not to mention my Dad), each demanding their very own breakfast and on some days, lunch. At last count, there were 8 squirrels, 6 blue jays, 4 woodpeckers, and gosh knows how many sparrows all awaiting her appearance in the morning.

Oh, and if you think I just mean they’re waiting for the bird-feeders to be filled, you’re seriously underestimating my mother. How dare you! No…this is the motley assortment of acolytes she hand-feeds peanuts to in the morning. The sparrows are spoiled though. Don’t let them fool you, everyone says so. They need their peanuts crushed. The divas.

The groundhog, well, he’s a loner, so she set him up a stash back behind the shed (she calls it a compost pile, but I know better).

The ironic thing is that this friend of nature is the same woman who used to yell at me as a kid whenever I tried to touch any form of wildlife whatsoever because she was scared to death that I’d get rabies.

Now I know the truth.  It was all just part of a silent campaign on her part to rule them all and keep the crown as Queen all for herself.

Sometimes I think I live on an alien world; an odd, foreign landscape sculpted by unearthly tides and weather conditions. I don’t think this is a far off thought either. Not that I actually believe I’ve been whisked away a la Wizard of Oz and dropped onto another planet. But if you were to take a look at the wetlands near my neighborhood you might cock your head to the side and see the resemblance to the Riddick movies. I put some pictures below to help strengthen my case.

The wetlands on the Eastern Shore where I live are protected.  There are stretches of wetlands all over the place, some small, some large.  All that’s left of this particular area of wetlands is what you see in these photos…just a very small patch surrounded by farmland. These are not your mom and pop type farms with geese being chased by pigs in the front yard and cows getting milked by some sweet ol’ Meemaw. These are the industrial suckers; farms that grow corn in bulk either to sell to large manufacturers or to grocery store chains.

Pretty bland scenery outside of the wetlands, but this little parcel of protected land more than makes up for it visually on its own. In winter when it’s all iced over or summer when it’s deep into a drought, this bit of wetlands looks like something out of a crazy sci-fi movie. There are incongruous lumps of grass that rise and fall out of the earth and dead trees vaulting up over my head. If I had to sum up the way it looks in one word I’d feel pretty confident going with “bizarre.”  The photos I was able to capture on my cell phone simply don’t do it justice. 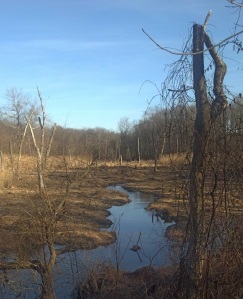 As I mentioned previously, these wetlands are supposed to be protected. While no loggers are in there actively sawing down the trees and no one’s pumping water from the ground or building apartments on the site, I have a sneaking suspicion that runoff from the farms just a stone’s throw away has been seeping into the earth slowly polluting this miniature self-contained biome. It’s obvious that the water is going bad and the trees are dead, which is terribly sad. Although I understand the need for the industrialized farms, how they provide food to many and all, watching the slow decline of a once beautiful and entertainingly unique little spot of land is still quite disheartening. These wetlands were once home to a menagerie of wildlife — bald eagles, herons, cranes, and other beautiful species were frequent visitors. They’re gone now, at least from this place.  I’m sure the poisoned water and the dead trees don’t have the same appeal they once had as a thriving ecosystem. At least I have these pictures to share and look back on when I want to be reminded of my own little piece of alien life here on earth. 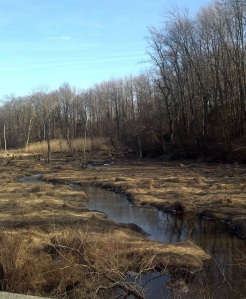