Charity starts  on the road and I just want to give a shout out to all those altruistic folks on the highways, at red lights, and in parking lots who are oh-so-kind enough to share their music with those of us less fortunate who might not have music of our own to listen to.

Without you, we might have to sit in glorious silence going over that speech we have to give in the PR meeting later, or perhaps, god forbid, we might catch up on the news or the latest weather report, or even be forced to listen to that audio book we checked out at the library just for our commute to work.

If it weren’t for you sharing your music at such a loud decibel that our cars shake, we might never know the pleasures of obscenity-laden music or lyrical rape scenarios, all while having our spines realigned and our heads on the verge of implosion from the sheer force of the bass.

So thank you, fellow citizen!

Thank you for doing your part to make what is already an annoying undertaking — our daily commute or running errands — that much more intolerable by giving of yourselves and your delightful taste in music.

Not long ago I went to the grocery store with my daughter and I could swear that news of the Zombie Apocalypse had just broken.  And I was worried as I crossed the parking lot because frankly, I’m just not ready.  Once those sliding glass doors inviting us inside noiselessly parted to allow us entry, I was suffocated in the full-blown frenzy that was housed within those walls. Pushing my cart through the aisles was like playing a game of Rollerball. All that was missing was an announcer on a stage, columns of flames shooting up behind him, bellowing, “Welcome to my Pleasuredome!” After navigating through the lanes and getting all our food items without suffering any serious injuries, I saw that the real madness was waiting for us in the checkout lines.

Now this particular grocery store has 9 different check-out lines. Want to wager a guess as to how many were manned by cashier personnel, given of course the mad-house state the store was in?  Three. Yep. Three.  The lines wound all the way back into the aisles. Did we accidentally stumble into a buy-one-get-fifty free promotion? It was like a Black Friday sale at Walmart. 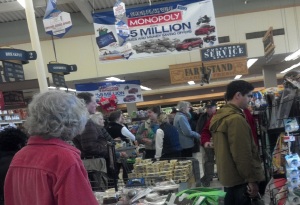 Sensing the waves of consumers crashing their gates, another checkout line opened up to alleviate some of the stress. While I should have been first for that line (since I had obviously been waiting longer than anyone behind me) it instead turned into a full-on logistics operation trafficked by the woman behind me who had apparently appointed herself as the line coordinator. She immediately started organizing the queue. “You go, then you go, then I’ll go, then you go,” she said. Normally this effort at streamlining operations would be commendable except that she completely forgot about us. Or ignored us. She was the bouncer at the velvet entry rope and my daughter and I weren’t on the list. Not surprisingly this pissed me off.

Sure, I could’ve just gone over to that line and made a scene since I was in the right (and in a mood), but it just didn’t seem worth it. Let everyone else act like the end of the world is approaching. I didn’t want to be part of the rabid tenacity that skewed rhyme and reason all for a dozen eggs. It ended well enough. No one was killed, the zombies didn’t come, and all was tranquil when we made it outside again.

I’m proud that my patience and my sometimes sharp tongue (okay, okay, no laughing from the peanut gallery over there) were held in check. It reminded me that sometimes the fight just isn’t worth it. Know when to pick your battles is an adage I’m trying to follow. Saving five minutes in the grocery store isn’t one that I’m willing to fight and recognizing that (for once) made me feel pretty good.