As I sit here listening to the wind raging outside, with the temps having once again fallen to an ungodly low, I think I’ve had enough. Why do I live somewhere where the air hurts my face and my feet remain frozen no matter how many wool socks I put on? And to think, I’ve recently considered moving to upstate New York or Michigan. I’m not sure what’s wrong with me. Okay, don’t answer that.

I’m not crazy about Summer…it’s too hot and humid here (not like Phoenix hot, but still…). I’ve always liked Winter, if there’s snow – but only with the caveat that I don’t have to go anywhere or do anything…not exactly a do-able lifestyle in my current situation. And I have to be able to get – and stay – warm…also annoyingly elusive these days. All things considered, Winter is just no longer at the top of my list. Spring and Fall? Those are my go-to seasons.

It seems as though freezing weather, bringing blizzards and ice storms, has been happening more and more lately.  Not only are the temperatures more frigid, normally warm parts of the country are now experiencing the deep freeze.  As I step outside into the arctic blast that is currently my backyard (dogs – gotta love ‘em, don’t always love walking ‘em), I realized that many of us have no idea what kind of havoc below freezing temperatures can do to us. Here are a few things to consider before you venture out onto the frozen tundra.

Yes, bodily fluids.  Gross, I know. But, they are not immune to the ravages of the freezing cold. Let’s start with mucous. OK, I said it. Believe it or not, mucous is our friend. It lubricates us.  It acts as nasal flypaper, trapping bad things that try to get into our lungs.  It is, however, composed largely of water. Exposing your nose to sub-freezing temperatures for more than a few minutes means that everything in your nose becomes a solid. Your nose now contains sheets of frozen mucous.

Here’s my advice for you.  Don’t sneeze! Sneezes travel at approximately 100 mph. Because the mucous is frozen, the frozen shards can become flying pieces of shrapnel, meaning that you could blow the front of your face off. Or at the least, injure the person in front of you. Not a pretty sight either way.

Another danger comes from simply breathing. If you don’t have a mustache, don’t worry about this one. As you exhale, your 98.6-degree breath hits the 20-degree air. The water vapor in your breath instantly transforms into minuscule ice crystals. If you have a mustache, the ice crystals collect on it.  In a few minutes time, your mustache is festooned in icicles, making you look like a Game of Thrones White Walker. No matter how cool that may look, I can’t imagine it’s fun…in fact, it sounds painful. Not having a mustache, myself, I couldn’t say with any accuracy, just guessing here.

Believe it or not, snow is cruel. It’s beautiful on a postcard or an ad for breath mints, but the stuff has to be moved so we can get around. Blech. Personally, I think adults need snow days more than kids do – we should start a petition or something. No work when it snows. As it stands, snow is often just a frustrating chore impeding us from getting to a place we really don’t want to be in the first place.

Depending on humidity, snow can weigh from 20 to 40 pounds per cubic foot. To give that some dimension, two feet of snow on a 15 x 25-foot driveway can weigh over 15,000 pounds!  That’s why over 100 people per year die from shoveling snow.

Another devilish trick of snow is that people can put it in your way.  Although I’m not sure if this can really be blamed on snow or people – and if it’s people, it’s just one more reason why they annoy me so.  After risking your life and heart by shoveling out your driveway, you run back inside to have a few Irish coffees to get your blood flowing again (because of course, right? I mean, don’t we all?).  Then you hear the sound that makes your blood turn to ice.  They’re plowing the streets.

The snowplow doesn’t care that you’ve just risked your life shoveling a gazillion pounds of snow. By clearing the street, the snowplow has now created a three-foot tall wall of snow across the entrance of your driveway – or in my case, completely trap my car in a mountain of snow…higher than the one I just spent five hours and 5,000 curse words removing.

This is when you consider topping off your Irish coffee, calling in sick, and just waiting for Spring. 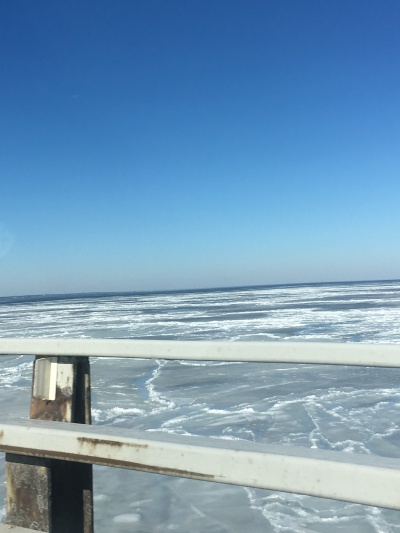 The Chesapeake Bay near my town — the whitecaps are frozen 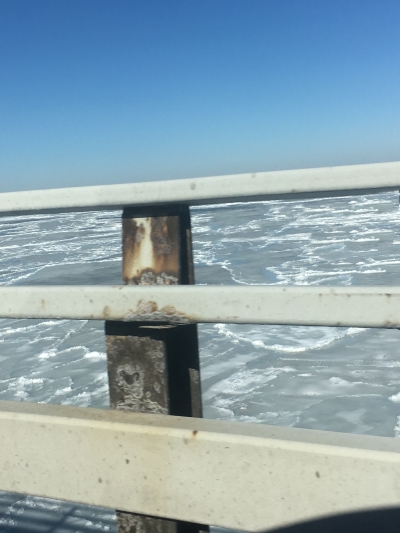 I’m not sure how deep the ice goes, but there was no movement in some spots — just ice. Seagulls were walking across it.

So, it appears that ALL of the leaves in the neighborhood have decided to hold a massive rave in my backyard. I clearly wasn’t invited.

Well, considering we were struck with a mid-March snowstorm (in between bouts of warm weather no less) — a late season f**k you from Mother Nature — I guess rain isn’t all that bad. I mean, it could be worse. Friends of mine in Nevada are under several inches of snow as we speak. In April. You have to admit, Mother Nature is nothing if not sarcastic. Gotta love that in a deity. 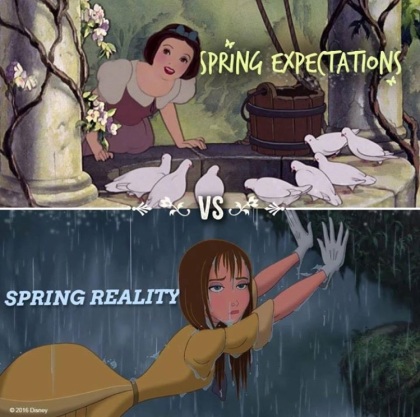 the look on her face in the rain is just perfect

Oh, Mother Nature, Mother Nature, you know I have such reverence and admiration for you. You are awe-inspiring and well, simply stated, amazing. But…come on! You had weeks and weeks to send Winter this way and you waited until NOW? A snowstorm? Seriously!? Right in time for Spring?? What the hell!? I’m sorry, with all due respect…this is such bullshit!

Well, it’s finally that time of year.  Out come the sweaters for the less “furry” of the brood. 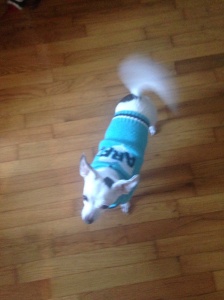 I almost didn’t catch her tail with the camera, it was moving so fast.

Despite the face, she loves her sweater. Pointing a camera at her on the other hand?  Not so much.